Speakers contain many components, including a frame, a magnet, an iron core, a voice coil, and a cone. The magnet and the cone are attached to the frame. The voice coil is an insulated wire wrapped around a bobbin and connected to the audio source. The bobbin is attached to the cone and contains a soft iron core.

When the voice coil receives an audio signal, it moves back and forth to vibrate the cone, which produces sound. The cone is often made from plastic, paper, aluminum, fiber, or rubber. The speaker may sit in an enclosure made from MDF board.

What Are the Main Components in a Speaker?

The most common type of speaker is the dynamic speaker, which is found in most home speaker systems, TVs, radios, and professional speaker monitors. The design has remained mostly unchanged for decades.

So, what are speakers made of? The most common components include:

The dynamic speaker contains a frame, which is also called a basket. The basket is typically made of metal and provides a sturdy framework for supporting the rest of the speaker components. The magnet is connected to the backside of the basket. It is secured in place by a metal top plate and a backplate.

A voice coil is a thin copper wire that is wound around a plastic bobbin. The bobbin is placed on top of a soft iron core and sits inside the opening of the basket.

The speaker is placed in an enclosure that is typically made from medium-density fiberboard (MDF). MDF dampens unwanted sounds and provides a stable frame for the speaker to minimize vibrations.

Plastic and aluminum are also occasionally used, especially for devices that have built-in speakers, such as portable radios. Plastic is typically molded into different shapes and is the most affordable housing for a speaker. Aluminum is also affordable but is less commonly used, as it is less likely to shield the speaker from vibrations that may distort the audio.

Wires from the voice coil are connected to a panel on the back of the speaker enclosure. The panel contains audio ports for connecting the speaker to an audio source, either using speaker wire or audio cables.

The movement of the voice coil forces the soft iron core inside the bobbin to move, which is aided by the magnet. The movement causes the cone to vibrate, which produces sound. The cone of the speaker may be made from a variety of materials, including plastic, paper, aluminum, and fiber. Each material has different properties that impact their ability to produce sound.

Paper is the most common material for speaker cones. The paper is produced using a combination of wood, fibers, waxes, and resins. It is compressed to increase its flexibility, which makes the speaker more sensitive. Due to the sensitivity of paper cones, they are often used for higher frequencies, such as the frequencies produced by a tweeter.

Aluminum and other metals are occasionally used for speaker cones. The metal is not flexible, which allows the vibrations to start and stop suddenly. As with plastic cones, aluminum cones tend to offer a limited frequency response. Aluminum is mostly found in the speakers used in toys and small gadgets.

Fiber is a premium material that provides optimal rigidity for a quicker response to vibrations. The material can faithfully reproduce sounds across the frequency spectrum, including bass tones and high tones. 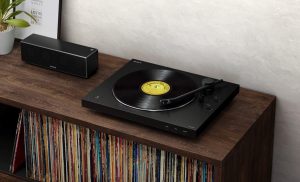