The Pro-Ject audio brand has been around for a while after its founding in 1991 in Austria. Their turntables are fully made in the EU and that means every little component. It recently has released a new turntable model that comes in two versions, the Pro-Ject T1 and the Pro-Ject T1 SB. In this article we are reviewing the regular T1 model while at the same time taking a look at the difference made in the T1 SB model. » Minimal Design. A plinth made out of one piece with no buttons on top.
» Great Cartridge. The OM5E has great reputation.
» Quality Materials. An MDF plinth, matte tonearm and heavy platter.

» You can’t upgrade the cartridge to a different model. Since the tonearm can not be adjusted in height which means the stylus will need to be a OM5E or something very similar.
» Does not come with a built-in preamp.

In terms of design, the T1 can be best described as minimalistic. It features a one-piece plinth from MDF with a foil wrap that helps reducing resonance. The plinth is finished off with glossy coating in the colors black, white and walnut. Other than that, it features an on and off button and two-speed buttons on the SB model. The matt and tonearm are black and have a matte finishing making the overall look rather slick. It features three rubber feet that make it stable on almost all surfaces and greatly reduce the possibility of resonance. In terms of cables, the regular version has fixed cables and the SB version has removable cables, which is a benefit if you need to replace these.

So overall, we would say that the build quality is great, the components are solid and it is manufactured in the same way that Pro-Ject does for all its models. The difference is that most Pro-Ject models can be a multiple of the price of the T1. For example, the bearing where the platter is placed onto is the same one that is used in the Pro-Ject Essential III model that costs way more. Another example is the heavy platter made out of glass that ensures a more stable spinning record and speed consistency. Lastly, the tonearm was also used one Debut Carbon DC but they have made some adjustments such as removing the possibility to vertically adjust, instead, the tonearm is now a fixed height for the included Ortofon OM5E Cartridge. 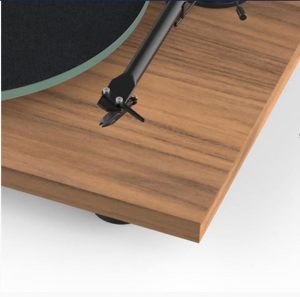 The T1 is a manual belt-drive turntable, just like most high-end turntables on the market. Audiophiles opt for a manual system as it means fewer components which give a more classic vinyl experience. The handling is quite simple, with the Pro-Ject T1 you simply use the lever to raise the tonearm, move it over to above the record, and lastly lower it onto the spinning record. Of course, the reverse procedure should be done once the record has ended.

The system is a belt-drive one, something we always prefer in high-end turntables. The most important reason here is always the reduction of resonance. Because of the belt, the motor is not placed directly underneath the platter but to the side, this greatly reduces the change of any motor noise reaching the platter and disturbing the sound. The motor features an electric control system that measures and corrects the speed to increase its speed consistency.

Coming to one of the most important components, the cartridge. The T1 includes the Ortofon OM5e cartridge that is perfectly fitted and adjusted for the turntable. The fact that the tonearm isn’t adjustable in height greatly narrows down the cartridges that can replace the OM5E. We actually think this doesn’t have to be a limiting factor for 99% of the people as the Ortofon simply is an amazing cartridge that is hard to top. It has an elliptical shape that generally has more contact with the grooves of a record and therefore can give a more detailed sound.

Next up let’s talk about the phono stage or preamp as we like to call it. The T1 doesn’t have one built into the turntable which most common with higher-end turntables as audiophiles like to create their own audio setups. However, the so-called ‘SB’ version of the T1 does have a built-in preamp. So, if you don’t have an amplifier with a built-in phono stage we would recommend this version, it also has the possibility to bypass the preamp if you want to upgrade later on. We have personally not tested the SB version and have heard mixed things about the built-in preamp form an audiophile perspective, so if you are really serious about the sound stage we would just go with an external preamp anyway. Setting up the turntable is quite easy, mostly because of the minimal components included. You simply need to apply the belt and put the platter on top to set up the turntable. After that, it is just connecting the cables to your audio setup and it is ready to go! It comes aligned and adjusted straight out of the box, which saves time and a lot of hassle.

But now let’s talk about the most important aspect, how does it actually sound? Well, it is best described as rich and dynamic. It is rich in the sense that the sound seems full and the whole audio spectrum is presented nicely. At the same time, it transparent in the sense that every audio layer and instrument can be heard well, even when there is a lot going on. This makes it suitable for even heavier genres such as dance or rock. The only thing we found, and that is almost always the case in this price range, is that the deep bass could be more detailed like you will find in the high-end turntables. Lastly, in terms of tracking the T1 does a great job as skipping or skating is not present, even when playing older slightly damaged vinyl records.

Overall the Pro-Ject T1 is a really decent turntable that will suit most vinyl lovers at a reasonable mid-range price. Its build is similar to that of high-end turntables costing a multiple thanks to the limited amount, but overall high quality, components such as the Ortofon OM5E cartridge and the heavy glass platter. 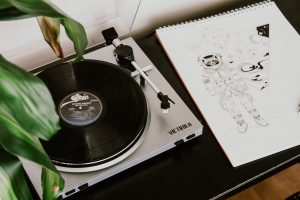 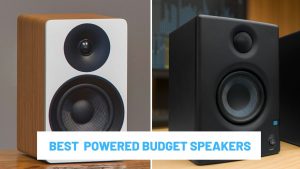