The answer here is yes, some turntables are able to play all records sizes. Most turntables in today’s market are able to play 33 RPM and 45 RPM records. A smaller percentage of turntables also have the possibility to play 78 RPM records. However, they need some manual adjustments to do so like replacing an adapter, belt or stylus for a 78 rpm version. These are often included in the package but can also be sold separately. Read more below on the type of records and how to set up your turntable to play them.

What are the different Record Sizes and Speeds?

As stated earlier, there are three different sized records. They are:

The 33 1/3 RPM record is the most common and today’s standard while 45 RPM records often are special edition records. 78 RPM records are in fact an older format that really common in the heyday of vinyl. 78 RPM records are different in the sense that they have bigger grooves which only allows them to have fewer minutes of sound on each side. The 33 and 45 RPM standard has much smaller grooves called microgrooves that allow for much more music on one record, but of course, the turntables had to keep and have more detailed and smaller needles now called styluses. This is why 78 RPM records need some attention to play on a modern turntable. Below is a breakdown of the three record types.

This particular record is the largest. It measures about 12 inches in diameter with a speed of 33RPM.  This record came into limelight when several record companies discovered that they could print smaller grooves without losing sound quality. It can save up to 22 minutes of music per side. The record was created at a time the 78RPM was popular in the market. However, it did not gain prominence in the consumer market until 1948. Most of the records you would find in the market are the 33RPM records.

This record is measured at 7 inches in diameter, and it plays at a speed of 45RPM. Typically, it can store up five minutes of music on each side. Because of this smaller size it is mainly used for singles and special additions, unlike the 33RPM record that can hold an entire album. The record type was created in 1930 by the RCA. It was targeted at competing with the 33RPM created by the Columbia Record. By 1950, many manufacturers began to seek 33RPM and 45RPM records. The major advantage the 45RPM record has over other record sizes is its size. It is physically smaller than the other records. This means that they were produced at affordable rates.

This particular record size is measured at 10 inches, and it plays at 78RPM. It is a vinyl record of rare size. It can save about one song per side because it bigger grooves, unlike the 33 RPM record that can in some cases hold up to one hour of music. Old 78 RPM records are made of thick and brittle shellac, which can make the edges to fall off. This is different from the 33RPM record because it is made of studier vinyl. It was the first kind of record to be created, and it remained popular until World War II. However, there has been rise as of late where manufacturers are bringing out special additions on 78 RPM records made from sturdy vinyl material. 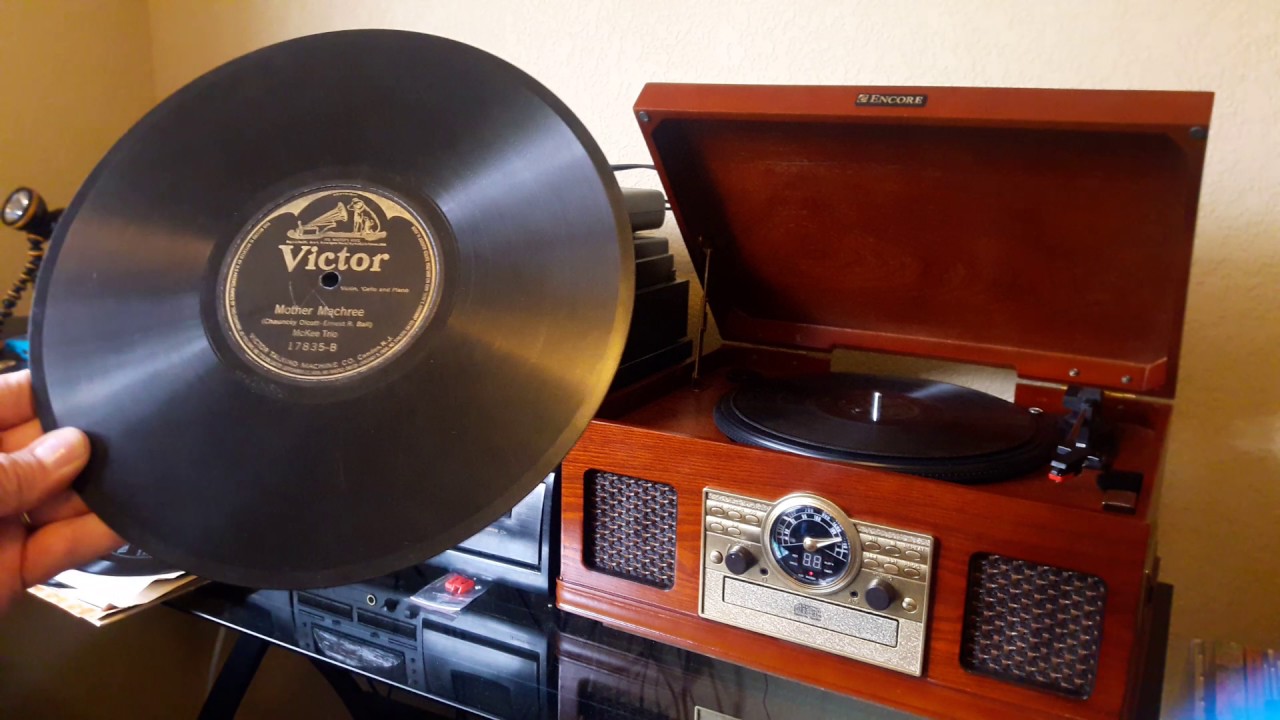 Can you play 78 records on a modern turntable?

We have explained that most turntables in today’s market in most cases play 33RPM and 45RPM records. However, not all turntables are able to play 78 RPM records. Often the manual, box or specification will indicate if 78 RPM playback is featured and what adjustments need to be made, these turntables often have the label three-speed on there. Manufacturers have come up with the following three possible adjustments to allow 78 records to be played:

In most cases, an adapter will be needed that is included or must be bought separately. This adapter must be placed on top of the motor and often you really need to open your turntable to attach it, quite the hassle. It depends on the turntable model if the speed needs to be adapted accordingly, some will have and 78 rpm speed option.

Other turntables will have a simpler solution which is a simple belt change that allows the platter to run at 78 pm. The change is often more convenient than an adapter because in most cases you don’t have to open up the plinth as the belt is placed above it.

Because 78 RPM records have a way bigger groove you also need a different stylus, otherwise, damage could be done to either the record or the stylus. The solution that stylus makers such as Ortofon have come up with is the ability to replace the stylus tip. On a lot of their models, the front (tip) can be replaced for a 78 version. This can be as easy as sliding in and out of the tip. Of course, the stylus of your turntable needs the capability to do so, so please check in the manual if you have 78 rpm supported stylus.