Bluetooth is slowly becoming a common feature within turntables. And for a good reason, it makes it easier for people to set up their sound system and offers new features such as vinyl digitalization. Regular setups often have a separate preamp, amplifier and speakers hooked up to a record player. With Bluetooth, you can simply connect your Bluetooth speaker(s) or headphone and start listening, truly plug and play.

The Audio Technica AT-LP60X is the first model from Audio Technica that features Bluetooth. Of course, the brand is known for its really decent quality turntables that actually don’t break your bank. This is why we have included it as one of the favorites in our list on the Best Record Players for the money. The AT-LP60X is the successor of what was one of the best low budget turntables on the market, the AT-LP60. The model still holds up as we often recommend it to vinyl beginners which is why we included it in our best cheap turntables buying guide.

In this review, we are going to look at the improvements made over the regular AT-LP60 and what we can expect from this new model. Of course, we will look in-depth into the onboard Bluetooth. Lastly, we will try to determine if the AT-LP60X is a good budget buy in general.

The design of the  AT-LP60XBT is rather minimalistic but at the same time has a nice retro feel with the contrasting colors. It looks sleeker compared to its predecessor and looks more premium, it can be a unique touch to any room.

However, we do find that the materials can feel rather cheap, although that is something you can expect with such as low budget turntable, it has not improved int this case from the old model. And while the parts are properly built the use of plastic materials makes this turntable feel rather light, great for transportation but not a great indicator for quality.

The design comes in four editions with brown, metal, red or fully black as the options to choose from. The buttons are smaller and placed well in the front panel. The dust cover is also improved as it more conveniently fits the casing without blocking the front buttons. The overall feel reminds me a lot of Nintendo consoles with its contrasting colors and small but playful buttons. 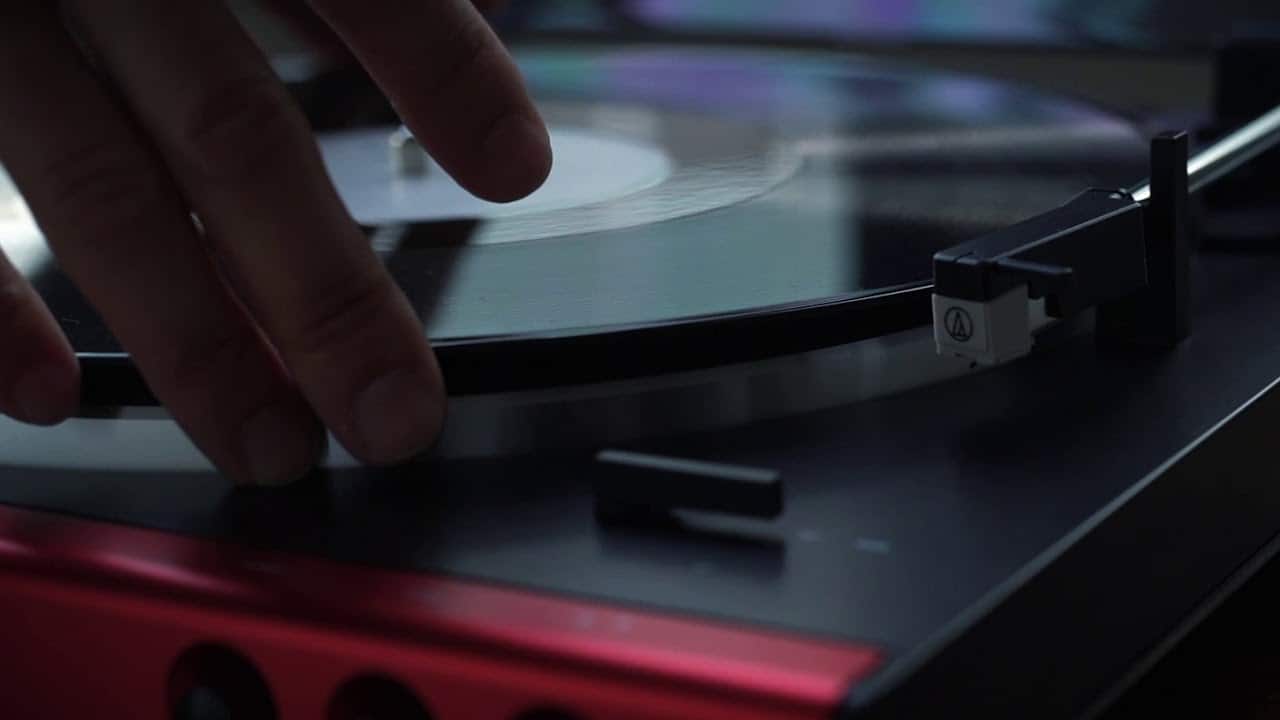 What makes this turntable plug and play besides Bluetooth is also the fact that it has a built-in preamp. A really nice addition considering the price of the device. It also comes with a button to bypass the internal preamp, this makes it not only a suitable device for beginners but also for people that want to upgrade their vinyl setup later on by connecting an external preamp. It also comes in handy when your amplifier already has an RIAA phono input to which you can connect the AT-LP60X.

The fact that this is a fully automatic turntable makes playing records really easy. It is simply placing your record onto the platter and pressing start. The tonearm will automatically place the needle on the record and music will start playing. When the record has come to its end, the platter will stop spinning and the tonearm will automatically return to its original position. As the record player plays 33 or 45 rpm records you simply have to set the correct speed, press start and the turntable will do the rest!

Now we come to the most important part, how does it actually sound? Well to say it in one word: good! Competitors within this price range are slim with only some models from Crosley and Lenco, however the sound quality of these devices always lacks far behind any mid-range or high-end model and could actually damage your records.

The sound coming out of the turntable really amazes me for the price. The music it beautifully displayed where it does not fall far behind for more expensive models that are two times the price.

The speed correction is rather good with a continuous tempo throughout the records. What stands out is the great dynamics you can hear throughout every genre. It features a decent base and rather great highs, the balance is done better than in most of the budget turntables out there. While the detail could be better and less compressed when playing really dense music the overall sound can be best described as warm and dynamic. The lack of detail could be solved by using an external preamp instead of the built-in one.

Overall the sound is transparent and objective which makes it suitable for almost all music lovers. Audio Technica has done a really nice job of providing decent sound for such a low costing device.

Overall, we see this model as a really good beginner turntable that provides all the modern features such as a built-in preamp, Bluetooth and fully automatic. With the price come some flaws such as the use of plastic materials and the lack of sound detail. However, the overall sound is rather amazing and the possibility to use an external preamp can turn this turntable into a really good vinyl setup for years to come. Audio Technica has established itself as a brand that gets it right even for their low budget models. The AT-LP60X is no exception.